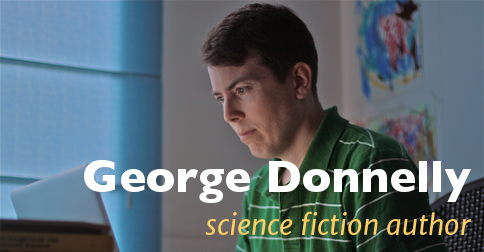 From time to time, maybe even every week, I’m going to share some short fiction with you here on my blog. Please let me know your thoughts on the story, what works and what doesn’t, in the comments below. Enjoy!

Marshal turned from his portscreen and looked at the boy. Unspeak. The rigid seat back pushed the thin slice of metal into his buttock. He pulled himself up from a slouch and looked back to his portscreen.

The boy climbed onto Marshal’s lap. He knocked the portscreen from Marshal’s hands and it clattered to the bare cement floor. Anger rose within him. “Doubleplusun—“

The boy stared up at Marshal. His smile was wide and mischievous. Marshal studied his face. The deep blue eyes, the round face, the wide smile — Liker. Like … me.

Marshal jerked his head back as the realization struck him. “Doubleplusunhate. Doubleplusunhate Jak.” He grabbed the boy and hugged him tight. Jak wrapped his thin sticks of arms around his father’s neck. A jumble of emotions stirred in Marshal’s gut but one word percolated to the top: defense.

“Jak forgetted goodpharm morewise. Ungood!” The woman smacked the back of her hand across Jak’s face. Behind them was a gray wall. A small window provided limited access to the steel city behind them. The buildings followed one another in silence, none reaching higher than the other.

Jake’s face turned red. He tilted his head to one side and swallowed. He looked at Marshal. Marshal sat against the wall at the tiny kitchen table. He faced the window but kept his eyes to his portscreen.

“Hate!” yelled Jak. “Hate! Doubleplushate! Goodpharm ungood. Kill me, inner me. No! No morewise.” He turned to his father. “Dad. Tell her.”

His mother grabbed the boy by the shoulders and twisted him until he stood with his back to her. She pushed him towards the door. “Learnplace unlater, Jak! Go!”

“Dad,” said Jak. His face fell and the beginnings of a frown formed around his mouth and eyes.

His mother glanced at Marshal. Her eyes were red and swollen. Her hands shook. She cleared her throat, grabbed Jak’s bag from the floor and jammed it into his chest. She pushed him and he fell to the ground.

“Dad, please.” Jak looked up at him from the floor. Water welled up and over his eyelids.

Marshal sighed. He put down the portscreen. The memory flashed in his mind. Jak’s eyes. Unhateful. Knowwantingful. Unfrowning. Goodpharm ungave it. Goodpharm unlived Jak’s … Marshal searched for the word. He imagined a ball of swirling, cereal-colored light inside of Jak. Soul. The Oldspeak came to him. His eyes darted from side to side and his forehead broke out in a sweat.

“Hate uncontrolled Jak! Hate Oldspeak!” yelled Jak’s mother. She looked at Marshal. Her face was taut. She raised her chin and sneered. “Marshal crimethink.” She nodded to herself. “Marshal unperson. Ownlife ungood. Oldspeak forbidded.” She arched an eyebrow and took a step towards the door.

Time stopped for Marshal. He planned this day. He didn’t want it but he expected it. He loved Johness. She once had Jak’s same smile. But he loved Jak more. Why did I have to teach Jak Oldspeak? The feeling of the archaic language in his mind shocked him but he knew the answer.

“Joycamp fixwill Jak,” said Johness. “Fixwill.” She laid her hand on the doorknob.

Marshal stood up and threw his portscreen at the wall next to Johness. He was behind her. Marshal pulled the hunk of pointed metal from his back pocket and pushed it into the side of her neck. He stepped away from her and she fell backwards to the floor. Crimson liquid pooled on the gray floor next to her wriggling body.

Marshal thought back five years ago to when he first encountered the Oldpseak book in the domicile of a prole unperson. “Dictionary,” it said in silver letters against a navy blue cover. The sharp, dry pages of forgotten words stirred an unexpected need in him. He steeled his resolve. Doubleplushate crimethink ungood. Ownlife. An ugly word. He translated it into Oldspeak. My own life. Jak’s own life. He took in a rapid breath as the image of a tree sparked in his mind.

“We go.” He pulled the boy up from the floor.

Jak’s chest convulsed. “Mom,” he whispered. Her body was still. He leaned down and caressed her cheek. “I love you.”

A man scowled at them in the doorway. Jak startled and the man saw Johness’s body. His eyes went big and he took a step back.

Marshal kneeled down next to his wife’s dead body. He extracted the makeshift knife. He ran to the door and forced the shiny metal deep into the man’s chest. The man fell back into the corner and stared at the floor. Marshal reached for Jak’s hand.

Jak took a step back. His mouth hung open and he shook his head.

“Slowful walk. Unfacecrime. Inair.” Marshal smoothed out the wrinkles in Jak’s shirt and pushed his hair to one side. “Untense.” The sidewalk was crowded.

Jak nodded and let his breath out fast. His pace accelerated.

“Slowful.” Marshal scrunched up his face then let the muscles fall. Freedom. He stared straight ahead and made for the movestop in lockstep with Jak.

At the movestop, a group gathered. People and transports streamed in all directions. Crowds gathered for the quick morning ration in a sprawling square cornerwise from him. Big Brother’s cartoonish visage streamed from building to building in a digital display of omnipresence. People dressed in white, silver, tan and sky blue laid eyes on him. Facecrime! He raged at himself for his lapse.

The white transport eased to a stop in front of them. The doors slid open. Marshal redoubled his grip on Jak’s small hand. His heart leapt with joy and he struggled to contain his ungood emotion.

“Killer!” The ragged voice came from behind him. “Unproceed killer Marshal.”

Marshal froze. Jak’s grip tightened and trembled. Marshal sneered at his own incompetence.

The crowd formed into lines and moved away from the pair. The square fell silent. Passengers filed out of the back door of the transport. The front doors closed mere centimeters from Marshal’s nose.

Marshal didn’t want to look down at his boy but he steeled himself. His heart crushed. Gravity pulled hard at the boy’s eyes and mouth. I doed crimethink. I doed … did this. He imagined the boy in joycamp.

No. The thought catalyzed a chain reaction of decision within him. Marshal whipped around and shook a finger at his accuser. “Oldthinker!” he yelled. He narrowed his eyes and strode towards the older man. “Blackwhite ungoodpharm oldthinker bewill unperson!”

The man staggered back, his eyes wide. “No,” he whispered. “Doubleplusgood duckspeaker. Ingsoc bellyfeel.”

Marshal turned and ran down the block. They turned left, ran down another block and the crowds were there again. They boarded a transport and stared straight ahead. Marshal rubbed his thumb into the palm of Jak’s hand. Bewill good. Bewill good. 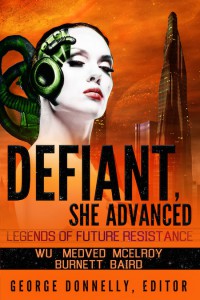 This story is part of the Defiant, She Advanced anthology, a collection of ten stories of daring and defiance. Get a free sampler and buy your own copy of the full anthology at GeorgeDonnelly.com/Defiant.