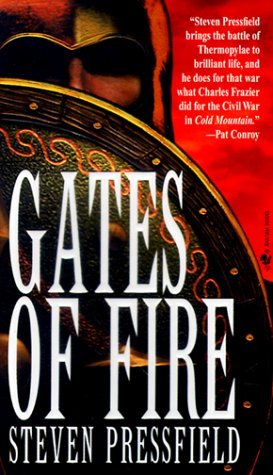 Is War Part of the Human Condition?

Is war inevitable? Is it a part of the human condition? Can we end all war, forever? Should we even try? What would stories be without war, the largest, most tense and free-ranging form of conflict ever?

I’m reading Steven Pressfield’s Gates of Fire. It’s a historical novel about the Battle of Thermopylae, yes the same subject of the movie 300. I enjoyed that movie but this book is so different. It’s deeper and benefits from a much wider focus. It’s really good!

One passage in particular has me both recoiling in disgust and nodding my head in approval. Here it is:

‘Mankind as it is constituted,’ Polynikes said, ‘is a boil and a canker. Observe the specimens in any nation other than Lakedaemon. Man is weak, greedy, craven, lustful, prey to every species of vice and depravity. He will lie, steal, cheat, murder, melt down the very statues of the gods and coin their gold as money for whores. This is man. This is his nature, as all the poets attest.

‘Fortunately God in his mercy has provided a counterpoise to our species’ innate depravity. That gift, my young friend, is war.

‘War, not peace, produces virtue. War, not peace, purges vice. War and preparation for war call forth all that is noble and honorable in a man. It unites him with his brothers and binds them in selfless love, eradicating in the crucible of necessity all which is base and ignoble. There in the holy mill of murder the meanest of men may seek and find that part of himself, concealed beneath the corrupt, which shines forth brilliant and virtuous, worthy of honor before the gods. Do not despise war, my young friend, nor delude yourself that mercy and compassion are values superior to andreia, to manly valor.’

Polynikes is a pompous ass teaching a doubtful boy a lesson. But that’s beside the point. The idea that war purifies is self-centered and ignorant. War destroys lives, especially the lives of innocents. The main character’s life story is illustration of this. War takes gentle farming people and it rapes, pillages and burns them. War is senseless. It destroys. Rarely can it claim to have built anything.

At the same time, I can’t help but respect the Spartans. They train mercilessly for war in order that, to paraphrase a passage in the novel, their women may never see the smoke from the enemy’s campfires. Contrast that with the lot of the main character, and the benefits of constant preparation for war are obvious.

In fact, it is foolish to not be prepared to defend oneself. As Polynikes asks the student in the novel, would you rather enjoy victory in war or be defeated?

The answer to that question is obvious, if manipulated. No one wants to lose a war but we do want to avoid it if possible.

Today, 2,500 years later, war is a massive, mechanized and digital operation centrally-controlled by a few. Hundreds of millions are pressed into service to finance war. Soldiers torture, male soldiers rape females and button-pushers assassinate dozens of people on a regular basis, including children, from thousands of miles away using pilotless aircraft.

What honor is there here, where the soldier risks nothing more than his own shame and guilt? What exactly is the crucible that eradicates all that is base and ignoble? A sniper rifle fired from 500 meters? A missile fired from a ship offshore? I don’t see it. I see soldiers returning home full of guilt and PTSD while the civilian population is lost in their creature comforts and convenient fictions.

Perhaps the discipline and courage required for war 2,500 years ago in Greece purged vice from men. Today, war is a video game. Today, war is the vice.

I don’t think we can remove war from men’s souls. That is too much to ask. But we can reduce its scale. We can stop the regular and ceaseless economic raping of the civilian population and thus cut off the financing for massive war.

Make war honorable again by returning it to a small scale in which those who fund it and participate in it do so voluntarily – and at their own risk – because they believe in the cause. War should not be just another government welfare program. War must not be something that happens because a bureaucrat scheduled it to make way for next year’s funding.

War should only be in self-defense. Defensive wars make the best stories, for just like at Thermopylae, we can have brave, romantic characters risking their lives for a just cause. Aggressive wars, on the other hand, are best reserved for cautionary tales about government power.